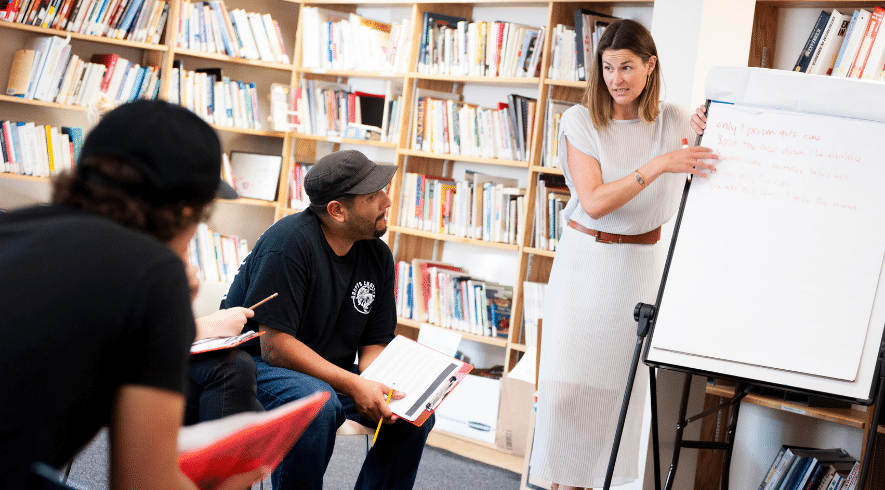 For many, conflict is something to be avoided at all costs. Some steer clear by hiding from situations, people, problems or even their own emotions. For others, conflict is a battleground, escalating quickly from shouting to anger, to often, bigger trouble.

At The Conflict Center, though, conflict isn’t a negative, harmful thing to avoid. Conflict is an opportunity for positive change, whether in a relationship, in a workplace or in a family. Through its interactive adult class, The Conflict Center is teaching people to change their perception of conflict and make it a manageable part of life.

“Conflict can be used in a positive way, as an opportunity for growth, understanding and learning,” said Rachel Protentis, the series classes program coordinator at The Conflict Center.

The Conflict Center’s workshop, called “Addressing Conflict & Anger Effectively,” is offered as a traditional six-week, two-hour class or an intensive weekend course that runs on two Saturdays. People join the class for various reasons and some are required to be there; but for many, it is the first time they are thinking critically about their own emotions during conflicts and learning skills to better handle those experiences. The nonprofit also is working to expand its reach, offering workshops in a variety of workplaces, from homes for seniors to religious institutions to other nonprofits.

“Everyone experiences conflict, but we are rarely taught how to manage it,” Protentis said. “I’ve had people say to me: ‘Why don’t we take this class in school, where we can learn these techniques?’ “

Classes rethink the emotion most often associated with conflict: anger. While anger can be viewed as negative, scary or painful, The Conflict Center works to reframe anger as normal, natural and healthy. Students discuss the roots of their own anger, explore their conflict styles and learn to identify the triggers that make them angry.

“There are often good reasons for anger, it helps us recognize injustice, pain, loss and fear,” according to the class workbook. “How we handle our anger can make it work for us or against us.”

Participants gain skills to control their anger and make conflict healthier and more productive, including active listening, using “I” statements, problem solving and cooling-off techniques. “What may work for one person during a conflict,” Protentis said, “may not work for someone else, so lessons include a range of tools.” Equally important is offering participants chances to practice these new skills. Learning to take a second to cool down during an argument is great in theory, but much harder during a heated moment. By practicing with others during class, then discussing what worked and didn’t afterward, participants can begin to perfect the techniques in a nurturing and safe space.

“A lot of this class is about practicing it,” Protentis said. “The idea is that if you continue to use these things, you will get better and you will feel better.”

Tags :
AngerEmotionsPracticeClasses
Categories :
Simply put — we teach people to solve problems and build relationships. We want families, schools and communities to put themselves at the center of nonviolence. Our programs equip people with skills to navigate conflict productively.